A fruit medley of a tea with an abundance of health benefits!

GABA tea processing was first introduced in Japan by Dr. Tsushida and his team in 1984. The tea is processed with nitrogen, not oxygen which will convert almost all of the glutamic acid into GABA. Gaba tea has at least 150mg of gaba rather than the usual 6mg per serving.  GABA has many reported health benefits including:

Harvested late April in Ali Shan. Aroma is an intense medley of red currents, raisin, dates and stewed plum. Although the potent aroma reminds me of a stodgy Christmas pudding I am very happy to report that the taste is a much more refined red fruit experience similar to an ageing white tea! There isn’t much in the way of sweetness because of the ‘Gabba tea’ processing. It doesn’t take a lot for this tea to get going and is quite hard to over brew which makes it a perfect candidate for big tea pot or gong fu style brewing. 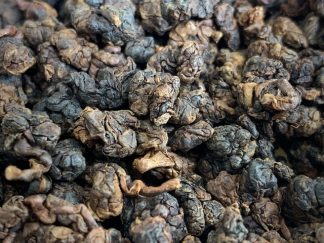