The most famous Puerh tea recipe and a reliable cake to age well.

The 7542 Raw Puerh cake is arguably the most legendary, collectible and faked recipe released by Dayi. This recipe is widely sought by investors and is generally seen as a very reliable cake to age well. The cakes having rested in Guangdong since 2011 in dry storage were purchased via an official Dayi dealer in Guangdong. The Guangdong storage has turned the leaf a dull brown and pushed the leaf well down the track of aging. Bitterness is still apparent but somewhat muted. The broth is a turning orange. The taste is deep with sweetness setting in. Later steeps will offer more fruity/nectar aroma and flavour with fruity aftertaste! An energetic Chi is starting to make an appearance also. The texture is now very noticeably smoother to earlier years. Texture, sweetness and chi will build in later years!

7542 unlocking the code:
In the Pre privatisation days the Menghai Tea Factory AKA (Dayi/TaeTea) was part of the CNNP group of national tea factories. All tea recipes under this group were not given names, just a code. The code may seem boring and uninteresting but it will actually give you an in depth idea about the tea cake!
75 signifies the year this recipe was first released
4 signifies the average grade of leaves (Puerh grades from 1-9, 1 being tippy buds through to 9 big course leaves)
2 signifies the factory in Menghai
It is advised to only buy Menghai tea from well referred or trusted vendors to ensure your getting the genuine article. 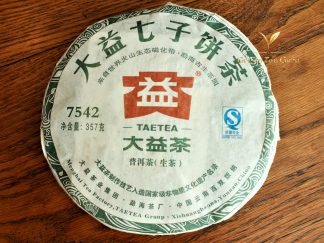