WHEN ORDERING A FULL CAKE IT WILL BE WRAPPED IN A ‘GURU’ WRAPPER!

We sourced this Raw from Leo of ‘Leo Tea’ in Hong Kong on our 2018 tea trip. The origin of the material isn’t clear. The lady who pressed these cakes back in 2008 originally planned to sell them under her own brand, a brand that never came into fruition. The wrapper less cakes, placed in tongs, were then sold in bulk to a conglomerate She assured her buyers that the cakes were 100% Yiwu material but wouldn’t disclose exactly which areas they were from for fear of loosing her exclusive farmers! The dry leaf does have a slight pungency to them that I have found on other aging Yiwu Raw’s. There is a fair amount of bitterness noticed when pushing the tea out however and the flavour profile isn’t ‘typical Yiwu’. More than likely, the material has been cut with Menghai area leafs. It’s a good tea, worth its money tho! Smooth, sweet with long after taste that can carry for over ten minutes. Leo is stashing this tea away for a few years and will, in time release them under his own label. we were lucky to persuade him to part with a few for us to try!

We taste this tea in the video below! 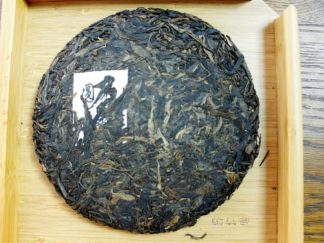 *POSTAL DELAYS*
Due to the current situation, we have noticed delayed shipping in some cases.
Please keep this in mind when placing your order.

Your information will never be shared with any third party.